At 168 km/h in ICE 1517 to Leipzig. The on-board restaurant was just closed due to "persistent odor nuisance", as the mumbling train attendant lets us know via loudspeaker. The otherwise so buttoned-up travelers always seem to be waiting for such knockers - suddenly there are humorous conversations and pleasantly scary speculations between the squares 36/38 to 68/69 (has anyone ever fully comprehended the seat numbering in the ICE?). Even the enervating loudly discussing insurance professionals at 45/47 ("the regional differences in the distribution key and so on"), allow themselves a brief thawing and participate excitedly in the group discussion.

The joking crowd agrees that A someone has surrendered. Unfortunately, the complicity of the daily dish "Königsberger Klopse zu Salzkartoffeln", which was previously advertised over the loudspeaker, can not be ruled out.
Fraction B) assumes acute EHEC and aftermath in the on-board restaurant. We are not following this idea any further. We're not here in Hollywood.

My colleague, traveling with us, set off for the board restaurant shortly before the announcement, to get some refreshments. Car 21 puts all hopes on him now. Passing minutes of tension until he shows up. I register with relief that he carries the drinks in front of him - so it does not come to the worst, we do not have to thirst. However, he also has no idea what happened. Darn. General disappointment spreads.
The travelers change a few humorous words and then fall back into the twilit state - one does not know each other and ignores himself as well as before, as good as possible. The insurance duo now wants to "exchange certain variables in the model to see that this also applies to the economy". Höm?

I notice that Die Bahn also seems to have changed a variable in the model: My "2010 Königschaffhauser Vulkanfelsen Grauer Burgunder Qualitätswein trocken" is now available in a delicious 0.3 l paper cup with an upbeat print "Enjoy on the go". Now. The wine itself is fine. Through the paper cup, however, he gets a dubious taste component. Did not these great plastic wine glasses get together sooner? Where did they stay? Dear Deutsche Bahn, please introduce the Plastikdinger again. This certainly looks much better with the Königsberg Klopsen. 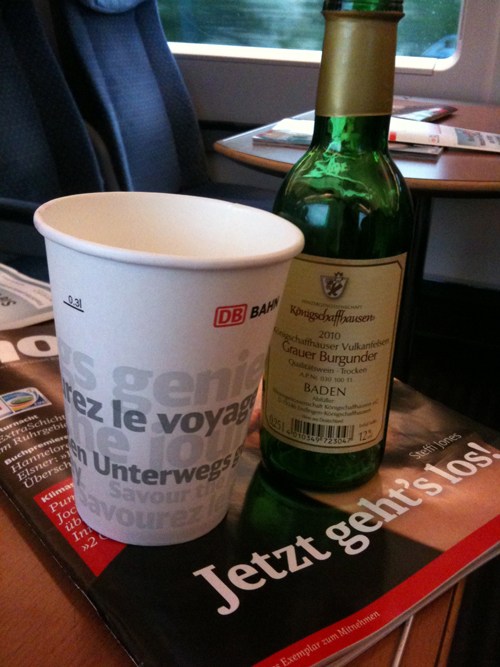